Globiflow is now packaged with Podio on Premium Podio accounts 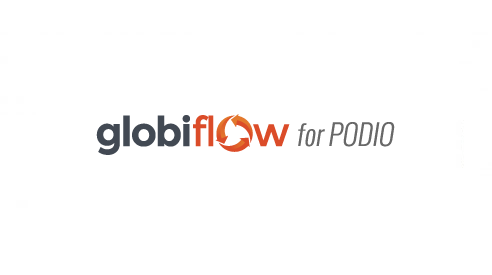 The Podio team have just announced that they have integrated Globiflow, as part of Premium Podio accounts. Citrix will now have exclusivity for reselling and offering support for the product. This is both good, or not-so-good news, depending on your current Podio plan and number of users.

If you haven’t already come across Globiflow, it is a strong product that tacks onto Podio, allowing you to create even more advanced, complex workflow automation, with better date triggered actions and automated emailing for example.

The pricing logic is that companies with at least 5 licensed users of Podio Premium, Podio Enterprise, or ShareFile Platinum will have access, at no additional charge, limited to:

Given Globiflow’s previous pricing structure, this results in a more cost effective solution, for those already using the higher tiers of Podio accounts, as they’re now receiving an even stronger product.

Now for the (potentially) not-so-good news…

Since Globiflow is no longer available without having a Premium Podio account, an upgrade will be required for Podio Free, Podio Basic and Podio Plus users that want to use Globiflow.

While the difference in Podio account prices is certainly fair, Podio Premium has a minimum requirement of 5 users… So a single Podio Plus user for example would need to upgrade from USD $14 p/m, to USD $120 p/m to take advantage of Globiflow, when it previously started off at USD $9 p/m. Yikes.

We’re huge fans of this product, feel it’s a positive move for Citrix, and will continue to recommend it as a New Zealand Podio Partner, but the price appeal of Globiflow has now been slightly dampened for the smaller organisations trying to save resources through these systems.

If you’d like to discuss the benefits of using Globiflow with your Podio installation, please get in touch with our team.

Tip: If you found this useful, you can get our latest ideas delivered direct to your inbox, for free, right here.